Here are my final submissions for the second phase of the Ultimaker Hero Design Contest.

You can take a look a the other users entries HERE.

All of these models were created in the span of about 3 weeks :)

As of right now, still haven't heard back about what the results are.

Thanks for checking out my stuff. Let me know if you have any feedback!

Home page:
I wanted to expound on the idea/theme of the "Global community of Makers", who are all "Makers at heart".
The gears represent the communities of makers around the world, and how they all work together to help Make the world a better place.
-The placement and density of the gears was generated from a NASA image of lights on the earth at night. I used this light map to approximate where the highest density of Makers are located.
- The heart illustrates that we are all connected by the same passion to Make.
- the cargo plane is delivering boxes of Ultimakers to the Makers of the world.

Products page (entire Ultimaker 2 family):
The idea is that I wanted to highlight the themes of the community being a family that thrives on open source collaboration, just like it states on the product page right now.
The concept is that there will be a piece of filament that originates from the natural resources models on the left and wraps around and touches the experts (scientist) and then the global community along it's way to finally end up being fed into one of the Ultimakers. Kind of like a product life cycle.
The filament that is connecting all the characters together would end it's journey inside of an Ultimaker.

Ultimaker 2 page:
The owl upgraded...
Trying to capture the idea of "leap forward" and "the ultimate 3d experience". Having an older style bird/owl house next to a really sleek, modern one with all the amenities (bird bath on top, and bird feeders on the bottom).
I would use the natural seams in the models to divide them up for printing as to limit overhangs. I would really like to see these used one day for real in people's back yards!

Ultimaker 2 GO page:
Highlighting the idea of it being a "mighty mini 3d printer" yet "portable". To illustrate this I thought about having a mighty, commanding castle that travels around by balloons. The idea is that something extraordinary can be moved by something small, or that something small can create an extraordinary story. The castle would be designed to print in modular pieces. Ideally all of the castle parts and houses could be printed with the mini printer.

Ultimaker 2 Extende page:
wanted to expound on the idea of taller, "larger, more complex prints". Included in the models are the tallest buildings in the world. along with other machines that have been created that enabled us touch the sky and beyond.
For the balloons and the Macy's day style Ultimaker balloon, I was thinking that Ultimaker could use real string to make it look like they are floating. We would need to suspend everything by fishing line. All of the models can be printed in pieces for reassembly later, for better print quality.

Ultimaker Original page:
The Space explorer/ trailblazer. Just as in the way the astronaut is discovering new planets and technology, the Original Ultimaker was and is ground breaking in its field. For the true adventurer.

Materials page:
I originally started these models using things like sticks, rocks and leaves to complete the overall model, but realized that if these models were going to be distributed in the future to other makers, I wanted to use common objects that most people have access to that have standard dimensions. I wanted to try and make sure that anyone who printed these models would already know what to expect for a final product.
The idea is still the same as the original (using the sticks and other things). We are taking one material and transforming/ re-purposing it to create something completely new and unique. I decided to use common office supplies for the designs.
Growing up I played with my parent's staple remover like it was a dinosaur mouth (as I confirmed with several of my friends, so did they!), so you can see it used here in the models, transformed into a dinosaur. The commando opposing the dinosaur is using a machine gun with a magazine cartage made of staples. Post-it note sales on the pirate ship, and the pirate with a thumbtack peg leg. A supersonic jet with highlighters for the engines, and a pilot in his ejection seat. The parachute would be made out of a coffee filter.

Software page:
I wanted to illustrate the idea of what happens on the inside of the software, and what is on the inside of the Ultimaker robot!? Well, now we know. The file is uploaded, then inspected prepared and sliced for print. I was inspired by generation one Transformers illustrations that showed cutaways of the autobot's and decepticon's complex inner workings. Simple and elegant on the outside, yet a technical marvel on the inside! 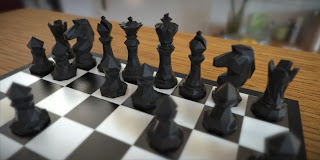 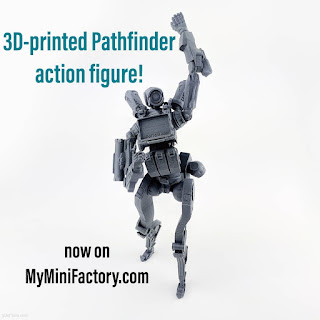